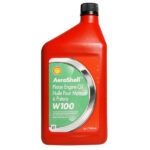 Phillips 66 X/C Aviation Oil is an ashless dispersant, multigrade engine oil specially formulated for year-round use in aircraft piston engines. It provides distinct performance benefits compared with single-grade engine oils, including easier starting and faster oil circulation at low temperatures, reduced warm-up time, and reduced oil consumption in most engines. It maintains its film strength under high loads and at high temperatures to protect against wear and piston scuffing. The ashless dispersant formulation helps minimize the formation of engine sludge, varnish, piston deposits and combustion chamber deposits, resulting in a much cleaner engine compared with the use of straight (nondispersant) mineral oils.

X/C Aviation Oil was the first FAA-approved mineral oil-based, ashless dispersant, multiviscosity aviation engine oil. It has more than 30 years of outstanding, proven performance in a wide variety of aviation uses, including flight schools, charter and cargo airlines, acrobatic aircraft, spray planes, race planes and virtually any other general aviation application. It is available throughout the United States and is exported to other countries around the world.

X/C 20W-50 Aviation Oil is recommended for use in opposed piston engines. It can replace Commercial Grade 65, 80 or 100 single-grade engine oils with no sacrifice in performance.
Recommended for use during break-in and then as the operational oil until TBO. X/C

No products in the cart.